GODS OF SNOOKER Part 3 featured Jimmy White (with me in the  background) on 23 MAY 2021 – watch it now, here on BBC iPlayer. 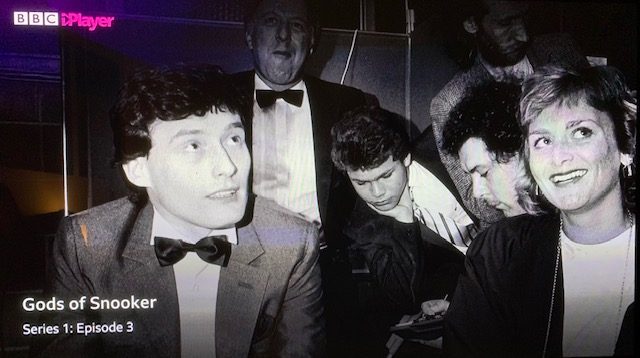 “A combination of things happened.  I met Harvey [Lisberg, who managed Herman’s Hermits during their heyday].  We just hit a lucky… I say lucky… You’ve got to have a gift.  That’s one thing.  The fact that Harvey was so pushy and came out with such outrageous ideas at times… some of them worked and that’s his genius.  I’d met Harvey a few months’ before.  I was working in an outfitters’ shop and got the sack.  My parents were freaking out.  Harvey was the only person who said, ‘This is great.  I’ll pay you a retainer to write songs’ and within six months I had a record with the Yardbirds.  Gouldman is referring to “For Your Love” which he wrote while still a teenager.  Harvey wanted The Beatles to record ‘For Your Love’.  I said: ‘The Beatles don’t record other peoples’ songs.’  He said, ‘Yes they do.. And I said, ‘Yeah but those are established songs [like “Twist And Shout” and “Long Tall Sally”].’  They were doing those in their act for years.  Fact was, the Yardbirds were doing a Christmas show with the Beatles, supporting them at Hammersmith Odeon at the end of ’64. And Harvey sent the song to the publisher.  He knew the Yardbirds were looking for material and he played them ‘For Your Love’ and that was it.”

The Yardbirds . . . 3 singles by Graham Gouldman

Evil Hearted You by Pixies (in Spanish) . . . first recorded by The Yardbirds to make a hat-trick of hits from Graham Gouldman viz For Your Love, Heart Full Of Soul and Evil Hearted You (all1965)

East West by Morrissey . . . first recorded by Herman’s Hermits to give MY BAND a hat-trick of hits from Graham Gouldman this time in 1966 with Listen People, No Milk Today and East West

Bus Stop . . . released by The Hollies in 1966 yielding their first U.S. top ten single (No.5) after another Graham Gouldman composition Look Through Any Window had charted (No.32) earlier that year.

Tallyman . . . The Jeff Beck Group (feat. Rod Stewart & Ronnie Wood) had a minor hit (No.30) with this Graham Gouldman composition.  The Litter also released a version on their ‘$100 Fine‘ album and Herman’s Hermits ‘recorded’ an (as yet) unreleased version – below:

I first met Neil Sedaka in 1970 on a visit to Don Kirshner‘s office in New York in a quest to find the next single for Tony Christie.  One of the songs he played me was Amarillo and I took it.  In November 1971, Amarillo became a huge hit all across Europe but, incredibly, rose no higher than no. 18 in the UK.  The post-millennium reissue mimed by Peter Kay was the best selling U.K. single of 2005 selling more than 1,000,000 copies and still the song resonates to this day:

In 1973, Elton John founded The Rocket Record Company named not after Neanderthal Man, but his signature hit Rocket Man.  In 1974 he signed Neil Sedaka and released his comeback album Sedaka’s Back to a receptive U.S. audience with original recordings from Solitaire (1972) and The Tra-La Days Are Over (1973) both engineered and recorded by Eric Stewart at Strawberry Studios with the nascent 10cc as session musicians on tracks like That’s When The Music Takes Me . . . and Love Will Keep Us Together . . .

. . . whose subverted title, inspired Joy Division‘s iconic hit Love Will Tear Us Apart, recorded at Strawberry Studios in 1980.  This mash-up using Captain & Tennille‘s cover version of Love Will Keep Us Together (U.S. #1 in 1975), demonstrates why some people think the inspiration wasn’t just limited to the title, but maybe the whole song?

Goyte/10cc mash-up video – “Not Somebody That I Used To Know”.

J Dilla’s final album Donuts [2006] is his magnus opus, a masterpiece. Two 10cc covers Johnny Don’t Do It (as Waves) & The Worst Band In The World (as Workinonit) feature on this album and are both of these are rated very highly.

Rubber Bullets (1973) wasn’t banned by the BBC but airplay was limited on release perhaps as it was considered inflammatory with The Troubles in Northern Ireland .  Here Eli Reiter for Esquire (2020) analyses the history of rubber bullets: Killing Them Softly: 50 Years Of Rubber Bullets, From Belfast To Black Lives Matter

Diddy‘s . . . Old Man Wildin’ (2015) was first released in December on the deluxe edition of his October mixtape/album MMM, and the track featured Jadakiss and Styles P.

In January 2016 it was remixed so as to feature fellow New Yorkers French Montana and Manolo Rose.