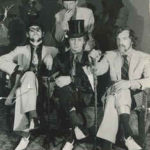 Their first single together was as ‘Yellow Bellow Room Boom‘ with A-side “Seeing Things Green” and B-side “Easy Life” on CBS.  Other band members were Stan Dulson a.k.a. Stan ‘Red’ Hoffman (The Measles), Stuart Sirrett (who had worked with Wayne Fontana) and Jeff Walters.

By ’69 they were a duo, ‘Frabjoy and Runcible Spoon‘ and I was their manager.  This name was a whimsical nod to Simon and Garfunkel.

“I’m Beside Myself” was released as a single by Giorgio Gomelsky‘s Marmalade Records in September 1969 with B-side “Animal Song“.

Graham Gouldman and Eric Stewart guested on the recordings, so it was the first time all four members of 10cc played together on vinyl.

I was conflicted when 10cc split in ’76, so I continued to manage Eric and Graham (as 10cc), with my other interests in Kev and Lol intact.

In late 1977, Godley and Creme released a triple LP, ‘Consequences‘.   The project was conceived to showcase their Gizmotron invention, but things got out of control and it took about 18 months to record, with input from other stars such as Peter Cook and Sarah Vaughan.

This was followed by a string of albums continuing into the late ’80s:

Most of their music was ‘experimental’ although they did flirt with the hit parade and on a few occassions got into the top ten with:

They directed their own music videos for these singles, leading up to “Cry” (1985), now included in The 30 All-TIME Best Music Videos.

“Cry” reached No. 16 in the Billboard Hot 100 chart in 1985 and the brilliant video they directed was a big part of the single’s success, inspiring sequences in Michael Jackson‘s (1991) “Black or White“.

MTV (a.k.a. ‘Music Television’) was well-received when it launched on 1st August 1981 and Godley & Creme were strangely positioned at both sides of the lens as pioneers in a new format, the music video.

The landscape changed ‘overnight’; now it was de rigueur that a good song wasn’t enough, it must be synchronized with a good video.

Godley & Creme had proved their competence in this new medium and soon they were in demand to direct videos for other artistes too.

They set a high-water mark in racy videos with “Girls on Film” (1981) by Duran Duran introducing naked girls to get airplay and eyeballs:

Some other memorable videos directed by Godley and Creme are:

I think it was back in 1983 when David Bowie first criticized MTV for featuring very few black artists.  Godley and Creme thought laterally to secure Herbie Hancock‘s “Rockit” lots of airtime by producing one of the first award-winning music videos to use automatons as actors.

By Hancock being kept out of the video the race factor is taken out. He appears only as an image on a televison, later smashed up (in protest) on the pavement at the front door of the house!

But in 1989 Godley & Creme split up and went their separate ways:

Lol Creme moved to Los Angeles continuing to direct commercials and music videos, one of which was (Simply) The Best by Tina Turner.

Another example is If I Only Knew by Tom Jones, featuring a cameo appearance of Lol’s son, Lalo Creme (ex. Arkana).

In 1992 Lol directed his film, “The Lunatic“, a comedy set in Jamaica about a good-natured madman (Paul Campbell) who talks to trees and finds love with an oversexed German tourist (Julie T. Wallace).

In 2006, he co-founded The Producers with producer Trevor Horn.

. . . and others such as Girls and Boys by Blur

He also conceived and started “One World One Voice” a chain-tape video and album featuring various artists from all around the world, which evolved still further with Youdio (p.k.a. WholeWorldBand).

For this episode Kevin Godley drops by the show and we take a ‘deep dive’ into his history.  The chat is 3 segments: