In the early 90’s, I bought a home near Palm Springs, which is about 100 miles East of Los Angeles.  It was frustrating that there were no dedicated venues big enough to pay the advances needed for super-groups, only small theatres and casinos built on Indian reservations.

At the turn of the millennium, the Indian Wells Tennis Garden was built and I realized it would be perfect for staging all sorts of events.

So I contacted the then owner/manager of the arena Raymond Moore, who appointed me as music consultant and persuaded my best contacts to help secure top selling artistes for the arena.

The first act I delivered, The Eagles, sold out pretty much immediately such that we needed to add a couple more dates to accommodate all the demand – what’s more the tickets were pricey at $250 each.   We heard that 95% of the tickets were sold to residents local to the area. 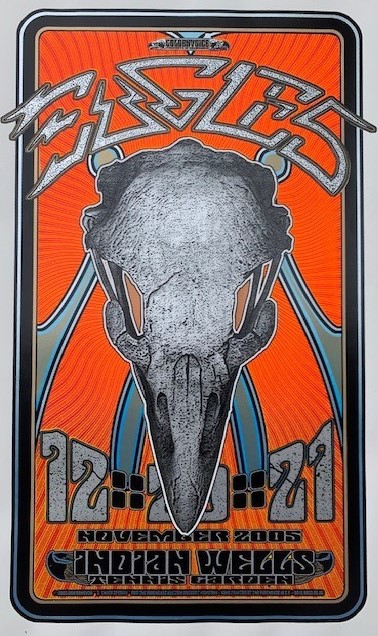 I also secured The Who (11 Nov 2006) to perform at the Indian Wells Tennis Garden; a band I first befriended in the 1960’s on tour in the U.S.A. with Herman’s Hermits.

Have you  heard the story about Keith Moon’s pet piranha when THE WHO supported Herman’s Hermits in the U.S.A.? https://www.loudersound.com/features/pains-planes-and-automobiles-the-who-vs-america

Keith Moon was always up to tricks on tour.  I remember a call at 3 a.m. from the manager of the hotel we had stayed at in Alabama, complaining about a missing toilet – apparently Keith had blown it up with a cherry bomb!  The Who were banned from Holiday Inns after that, although Herman’s Hermits with their clean image weren’t implicated.  For more information about Keith Moon’s antics as drummer for The Who on their 1967 tour suporting Herman’s Hermits refer to Jonny Black’s TeamRock article called: “Keith Moon Takes A Car For A Swim“.

Here’s footage of The Who at Indian Wells Tennis Garden (Nov ’06):

I revisited Indian Wells Tennis Club as a guest of Raymond Moore in his private box to watch compatriot Andy Murray beat France’s Adrian Mannarino in straight sets 6-3 6-2 on Friday 8th October 2021. It was really good to see him again in such fine fettle!