Having been influenced by Ramases‘ music from his teenage years, in 2014, my friend Peter Stormare, through his StormVox Records, has re-released Ramases Complete Recordings. See his video here:

“Ramases (Ram and Sel) arrived unannounced and unexpected sometime in 1969 at the insistence of John Paul Joans, a comedian I also managed, who insisted they look me up in London after he met them in New York.

So while I was taking a quiet weekend in my Park Lane flat with Carole, my wife to be, there was a ring at the door. Two characters dressed in full robes and togas were standing looking at me and Ramases declared “Hi, I am the reincarnation of an Egyptian God and this is my wife Sel.”

I was in a total state of shock but listened to their music and was impressed with two tracks – “Hello Mister” and “Life Child”. I arranged to take them to Manchester where they did some demo recordings with Graham Gouldman and Eric Stewart and subsequently an album called Space Hymns with 10cc (to be).

My recollection of Ram & Sel is that they were very knowledgeable in what they wanted to achieve musically and so far ahead of their time that their music still sounds great.” * 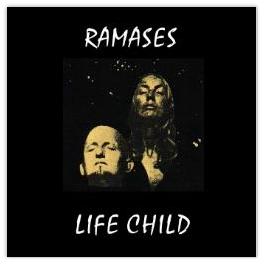 Notes from Selket on the topics raised in songs on SPACE HYMNS:

On 16 Sept 2021 Selket performed ‘Life Child’ with new re-recorded messages for the ‘Strawberry Studios Forever’ event at The Plaza in Stockport hosted by John Barratt and Peter Wadsworth:

The Space Hymns album was also noted for Roger Dean’s cover art. The spaceship is the spire of St. Georges Church in Heaviley off A6.

Lol Creme’s guitar solo in the original ‘Life Child’ was the first time the *Gizmo was ever used in a recording studio (see below).

* The Gizmo (now Gizmotron) was invented by Godley & Creme.

The track listing of the original album is as follows:

You’re The Only One

And The Whole World